The Alex Rodriguez Story Is Falling A-part
Amateur Hour... Courtesy of The Professional

New York Daily News and we're still counting how many reporters: "Embattled Yankee Alex Rodriguez has had a long relationship with a steroid-linked trainer who's been banned from major league clubhouses, four independent sources told the Daily News.

Angel Presinal, who was banned from private areas of every MLB ballpark after an October 2001 incident involving an unmarked gym bag full of steroids, has been tight with the Yankee slugger dating back to his time with the Texas Rangers, several sources said.

A former New York-area scout says Presinal, whose named surfaced in the Mitchell Report, was with Rodriguez in New York and Miami as recently as this past fall.

MLB has warned players to stay away from him.

He has been thrown out of clubhouses in Cleveland, Anaheim and Texas. 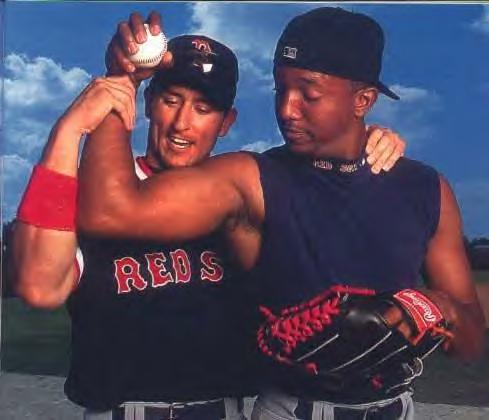 Pedro: 'Nao Has Worked with Me a Long, Long Time'

2.14.07, ESPN, Mike Fish: Angel Presinal: "Boston wanted to do surgery on Pedro Martinez [during the 2001 season]. Pedro says, 'I don't need surgery. I want to first try with my personal trainer.' He came to me at the end of the season and I worked with him. He had no operation and he came back and challenged Barry Zito for the Cy Young."

And David Not Only Works Out at His Place, He Was a Client...

"The walls of his [Presinal] cramped office in the bowels of the basketball arena are lined with photos of Presinal and some of the top-shelf players he professes to have trained: David Ortiz, Alex Rodriguez, Orlando (El Duque) Hernandez, Raul Mondesi, Pedro and Ramon Martinez, Stan Javier, Adrian Beltre, Ruben Sierra, Vladimir Guerrero." -- 2.14.07, Mike Fish, ESPN.com On Comcast SportsNet, Ortiz Says He Just Got His Work in at Presinal's Place

2.20.09, Ortiz on Comcast SportsNet Sports Tonight: “This place where he [Presinal] works it is a facility that’s like five minutes away from my house. It’s like an Olympic place where everybody go and hit, run, do all their work in. That’s like in the middle of everybody’s house. So we all go there and workout and… he’s a good trainer. He’s the guy that… he’ll teach you how to train. How to get your body ready to go, but besides that, I have no idea about all this...

"He got into some trouble before from what I hear and that’s something that he’s got to deal with, especially with what is going on right now but like I say, you have a facility close to your house, when I’m there, and I go and get my work in cause otherwise you show up here then nobody wants to see you so, we go there. Get our work in. That’s about it."

March 2006 MLB.com: More on Angel and the DR WBC Team, His Clients
July 2005 LA Times: Another Look Back at Nao and His Client List
Peter Gammons on SportsCenter: 'I Worked Out There, But Didn't Take Steroids'
In Other Worlds: Manny: 'A Choice of Winning or Losing' for LA Says Boras
Also, The Curse of Cursing Craig Sager: KG Goes Down
Mazz Is On the Lugo Bandwagon
Off the Air: Kevin Youkilis Approaches Gerry Callahan at Sox Camp