Will Sox Get Any Justice After Justin the Punk
Plunks a Fastball Into the Middle of J-Bay's Back?
Bust Him Like Beckett? Will Yankee Bob Watson Hand the Known Headhunter a Hefty Suspension and Fine?
Farrell Fires Warning Shot After 'Very Obvious' Cheap Shot...

Sox pitching coach John Farrell on WEEI's Dale and Holley Show talking about possible retaliation: "Our guys for one have each others backs and they're certainly be supportive if a situation like that were to arise. Speaking specifically about last night, he [Chamberlain] strikes out 12 guys, doesn't seem to have too many command issues, and if there was a purpose or an intent to throw up and in, or even if the intent was further than that, to send a clear-cut message, you can disguise it a little bit more than making it very obvious with the first pitch in the middle of the back to Jason Bay. So, those things aren't forgotten, we know that there's a history there between the pitcher in New York and our guys here, so not to say that he was specifically out to do that, but I think history speaks for itself, and we've got a number of games left with these guys."

Like Papa Jack Used to Say... Somebody Gotta Pay
But Beckett Was Right... Just to Sit Tight Last Night
Did Joe Girardi Set the Stage for Bay Getting Hit?

NY Daily News today: "As it turned out, maybe Joba Chamberlain should have plunked Jacoby Ellsbury, the very first batter of the game, square in the back and stared down the Red Sox dugout and dared Boston to do something about it. ...

At this point, the Yankees need to do something drastic, it seems, to put a stop to all the bullying by the Sox. Joe Girardi, in fact, seemed to set the stage for some fireworks Tuesday night when he ran the length of the dugout a night earlier to scream at Sox first base coach Tim Bogar, going so far as to warn him: 'You're gonna get somebody hurt.' " Sox Beat Yanks Out of House and Home Is the New Empty Stadium the New Fenway South?
Sox Make Themselves Home Sweet Home in the Bronx
Boston 7, Yankees Lose Again... 5-0 Start Over NY for First Time in 24 Years
A Big Pat on the Back to Pedroia for a Big Bat and a Bigger Relay Throw
Big Cheapie: Papi Gets an RBI, But Has No Short Porch Power
Beckett Hangs Tough, Okajima Comes Through, Saito, Too
It Really Was the Mother of All Turnarounds for Justin Chamberlain
I Read the New York News Today, Oh Boy ...
Daily News: Yankees' Weak Homestand Shows Rivalry with Red Sox is One-Sided
'We Want Torre' Chants Emerge in 9th Inning
Storm Rises Over Yankeegate 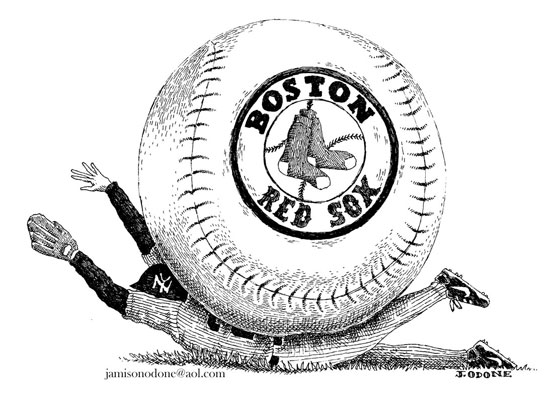